Do you wake up in the night sweaty and thinking about 90’s cartoons? Do you or a loved one have a pop culture problem? Do you see miniatures, board games, or cards out of the corner of your eye?  GhostBusters II is ready to serve you, and it’s friendly Kickstarter is waiting for your call.

Returning after its first successful Kickstarter “Ghostbusters” Cryptozoic is back with a sequel that adds new tiles, scenarios, and miniatures.

The game follows the events of the second Ghostbuster movie but also relies heavily on references from the 90’s Gostbuster cartoons.

There’s not much information about how to play on the Kickstarter page, but there a links to videos that will show you gameplay. It’s a cooperative game for 1-4 players that seems to be able to scale difficulty and level up players between scenarios. And of course it comes with a massive slimy pink box full of miniatures and stretch goals. Unless you want to dish out for the exclusive white collectors box, available only through the Kickstarter.

So if you love Ghostbusters, miniatures, and board games (and you probably do). Check out this Kickstarter and watch some videos. However let me leave you with a warning so my mind and your wallet can rest as ease. Cryptozoic isn’t known for making the best board games. And the first Ghostbusters game is considered to be a little bit of a running joke in the board game world. So if your a lover of flawless gameplay and mechanics, make sure you do your research. If you just want the minis or simply love the idea of playing as a Ghostbuster with friends, movie running in the background, I would say go for it! Like bad movies, sometimes a hilariously bad game is still a blast and worth every penny.

Click here to go to the Ghostbusters II Kickstarter page

Howdy everyone! Killer Kickstarters is a new segment that will showcase current Kickstarter projects that feature awesome miniatures and talk about the people behind them. All featured projects are still open (at the time of posting at least) so if you like what you see, you can click the link on the bottom to pledge. Let’s kick (pun intended) things off with a Kickstarter that has that old timy space western feel.

Rail Raiders Infinite is the newest game by Soda Pop miniatures. It’s an old fashion western train robbing game. Except the train is a spaceship…and the law enforcement are bots…and there’s a bunch of laser guns.  So team up with your fellow outlaws and then back stab them for the loot. Because this space train ain’t big enough for all of you. 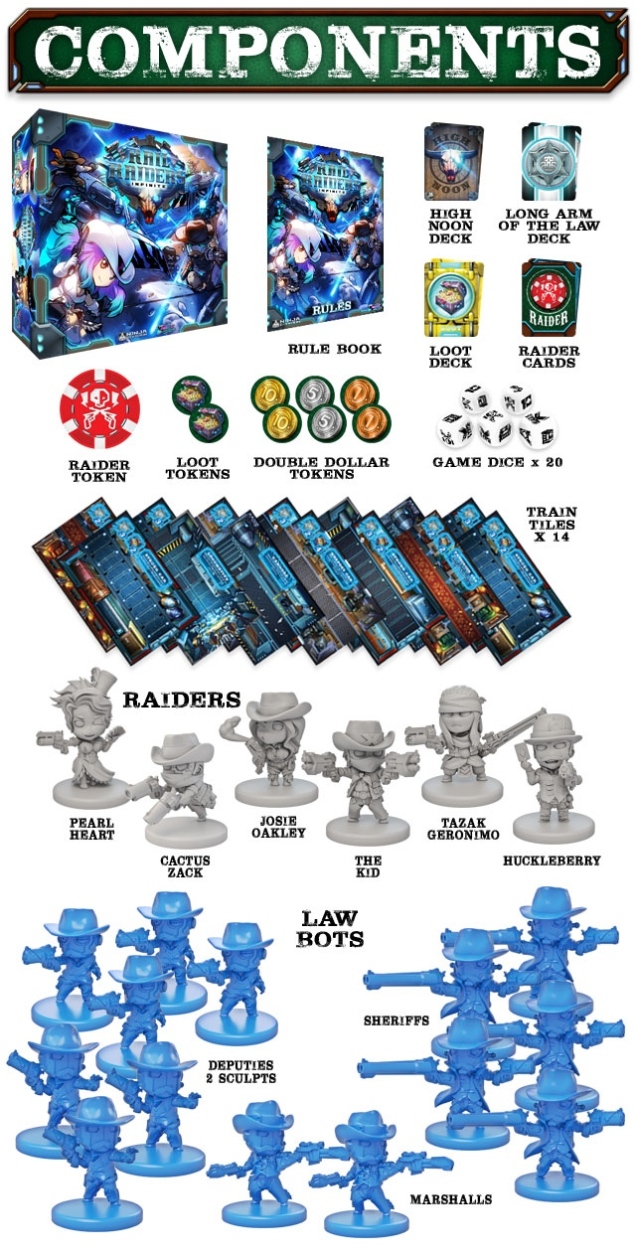 If your not familiar with Soda Pop minis, they’re a board game publisher that specializes in chibi miniatures. (Chibi is an art style that makes everything kind of small and cute) They’re a fairly large and successful company so if you don’t pledge it’s pretty much guaranteed that you’ll still get the game, and possibly for a lower price. But let’s be honest, this kind of Kickstarter isn’t about making a small time funding dream come true. It’s about all those glorious stretch goals

The base pledge is $50 and anyone who buys miniatures knows that this is an impressive haul for that amount of money. Be aware some of the bots are only available to those who purchase the expansions but it’s still an impressive amount of things to paint. On top of that there looks to be a pretty fun game underneath all that plastic.

As you brawl your way across this galactic space train you draw cards to place loot, law bots, and gain weapons and abilities. Then you’ll show down against opponents (bots or other players) by rolling 5 dice. The person who can form the best poker hand will win the duel. And of course there will be multiple ways to get a few aces up your sleeve. You are all outlaws after all. 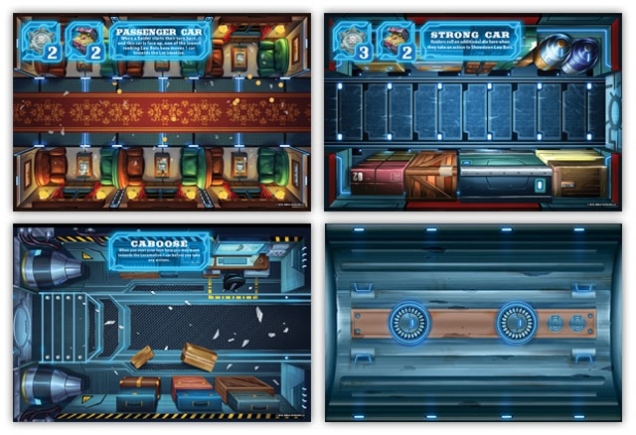 The art and components of the game look to be Soda Pop’s standard high quality production. And it includes plastic tokens and custom die, which is always a nice touch for a board game. There’s also more stretch goals to be unlocked so the game looks to get even bigger.

If your a board game player and you love nerdy references to double dollars and certain bounty hunters than I would suggest checking out Rail Raiders. And if your a lover of chibi miniatures it looks to be a good deal for a train load of minis. You can go to Soda Pops Kickstarter page to learn more about the game, see video reviews, and even get a print&play to try it out yourself. Just hurry because this bounty is only good for another 30 hours.