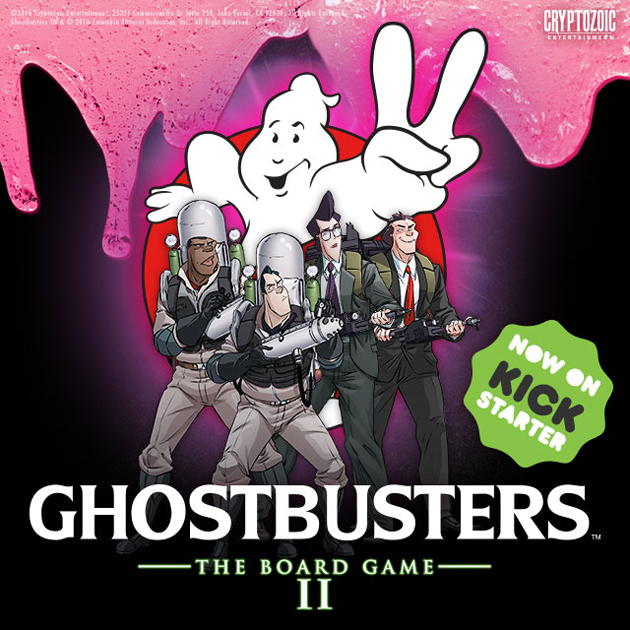 Do you wake up in the night sweaty and thinking about 90’s cartoons? Do you or a loved one have a pop culture problem? Do you see miniatures, board games, or cards out of the corner of your eye?  GhostBusters II is ready to serve you, and it’s friendly Kickstarter is waiting for your call.

Returning after its first successful Kickstarter “Ghostbusters” Cryptozoic is back with a sequel that adds new tiles, scenarios, and miniatures.

The game follows the events of the second Ghostbuster movie but also relies heavily on references from the 90’s Gostbuster cartoons.

There’s not much information about how to play on the Kickstarter page, but there a links to videos that will show you gameplay. It’s a cooperative game for 1-4 players that seems to be able to scale difficulty and level up players between scenarios. And of course it comes with a massive slimy pink box full of miniatures and stretch goals. Unless you want to dish out for the exclusive white collectors box, available only through the Kickstarter.

So if you love Ghostbusters, miniatures, and board games (and you probably do). Check out this Kickstarter and watch some videos. However let me leave you with a warning so my mind and your wallet can rest as ease. Cryptozoic isn’t known for making the best board games. And the first Ghostbusters game is considered to be a little bit of a running joke in the board game world. So if your a lover of flawless gameplay and mechanics, make sure you do your research. If you just want the minis or simply love the idea of playing as a Ghostbuster with friends, movie running in the background, I would say go for it! Like bad movies, sometimes a hilariously bad game is still a blast and worth every penny.

Click here to go to the Ghostbusters II Kickstarter page